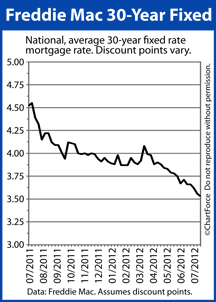 The average 30-year fixed-rate mortgage rate is now 3.53% nationwide, according to government mortgage-backer Freddie Mac’s weekly mortgage rate survey. The 3.53% rate is available to mortgage applicants willing to pay 0.7 discount points plus a full set of closing costs where 1 discount point is equal to 1 percent of your loan size.

Even as mortgage rates in Rochester drop, however, rate shoppers should be wary of a potential rate reversal. This is because July’s rapid drop in mortgage rates, mostly, has been fueled by market speculation.

First, with employment data lagging, inflation pressures low, and slower-than-expected economic growth, Wall Street now believes that the Federal Reserve will launch its third round of quantitative easing next week, a move that would likely include large-scale mortgage bond purchases.

And, second, investors are preparing for a potential sovereign debt default in Spain, the Eurozone’s fourth largest economy. The Greek economy, by contrast, which faces similar struggles, is 5 times smaller than Spain’s. A Spain default, too, would likely lead U.S. mortgage rates lower.

That said, if neither event comes to pass — if the Fed passes no new stimulus and Spain receives an ample-sized bailout — mortgage rates would be expected to rise as Wall Street re-adjusts its expectations for the future.

The change would happen quickly, too.

This week, markets will continue to take their cues from the Fed and the Eurozone, but with an eye toward U.S. housing data. The housing market is linked to economic growth so strong results may lead mortgage rates higher.