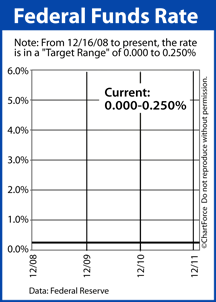 Mortgage markets improved last week, but by a slight amount only; not enough to move conventional mortgage rates in Michigan in any significant manner.

Wall Street watched as Eurozone leaders expressed little willingness to increase aid programs within the region, and as the Federal Reserve voted against new economic stimulus for the United States. The Fed Funds Rate remains near 0.000 percent and QE3 was not introduced.

Investors had expected the opposite outcome in both scenarios.

In most weeks, these stories would have led mortgage rates lower. There was, however, a fair amount of data suggesting that the U.S. economy is in recovery, and that tempered any major shifts in markets.

In addition, in its last meeting of the year, the Federal Reserve specifically mentioned that the economy has been “expanding moderately”.

These are all good signs for the future of the U.S. economy. Unfortunately, for mortgage rate shoppers and would-be home buyers, it may mean higher mortgage rates ahead.

Since early-November, mortgage rates have idled, moving within a range of less than 2 basis points and centered on 3.99%. According to Freddie Mac, this week’s average 30-year fixed rate mortgage fell to 3.94% which, at first glance, appears to be a “dip”.

To get access to that rate, however, requires more discount points as compared to prior weeks.

So, given global economic conditions and the mortgage bond market’s status as a “safe market”, the failure of mortgage rates to fall suggests that this may be as low as mortgage rates get. It’s time to look at locking in.

This week is a holiday-shortened week. Markets will close early-Friday and volume is expected to be thin. Therefore, expect exaggerated movements in rates. There are 3 releases related to housing (Housing Starts, Existing Home Sales, New Home Sales) and a consumer sentiment release.