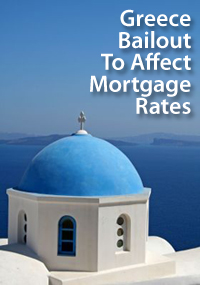 Mortgage rates had been higher since the start of August.

In published minutes from its July 31-August 1, 2012 Federal Open Market Committee meeting, the Federal Reserve revealed that, absent “substantial and sustainable” economic growth, many of its members believe further monetary easing would be warranted.

Recent data shows that growth may be sustainable, but it’s hardly substantial.

Should the Fed add new stimulus, it would likely come in the form of a third round of quantitative easing, a program by which the Federal Reserve purchases government-backed bonds on the open market, including mortgage-backed bonds.

“QE3” would push mortgage rates lower, likely. It’s not expected to be released (if at all) until the FOMC’s next scheduled meeting, September 12-13, 2012. There is a small chance it’s announced this Friday, however; the Federal Reserve is meeting in Jackson Hole, Wyoming for its annual retreat.

For this week’s rate shoppers, this week is filled with data and rhetoric. New U.S. housing data will be released along with recent inflation statistics. Both have the ability to cause mortgage rates to rise. In addition, second quarter GDP figures will be revisited and revised. If they’re revised lower, Fed-led stimulus may be more likely.

Lastly, Eurozone leaders reconvene to discuss the terms of Greece’s bailout. If terms are changed for the worse for Greece, mortgage rates may drop in a bout of safe-haven buying.